Dr. Jim Kurose is the Assistant Director of the National Science Foundation (NSF) for Computer and Information Science and Engineering (CISE).  He leads the CISE Directorate, with an annual budget of more than $900 million, in its mission to uphold the nation's leadership in scientific discovery and engineering innovation through its support of fundamental research in computer and information science and engineering and transformative advances in cyberinfrastructure.

Dr. Kurose is on leave from the University of Massachusetts, Amherst (UMass Amherst), where he has been a Distinguished Professor at the School of Computer Science since 2004.  He has also served in a number of administrative roles at UMass, helped lead the founding of the Massachusetts Green High Performance Computing Center, and has been a Visiting Scientist at IBM Research; INRIA; Institut EURECOM; the University of Paris; the Laboratory for Information, Network and Communication Sciences; and Technicolor Research Labs.

His research interests include network protocols and architecture, network measurement, sensor networks, multimedia communication, and modeling and performance evaluation. Dr. Kurose has served on many national and international advisory boards and panels and has received numerous awards for his research and teaching.  With Keith Ross, he is the co-author of the textbook, Computer Networking, a top down approach (6th edition) published by Addison-Wesley/Pearson.

Dr. Kurose received his Ph.D. in computer science from Columbia University and a Bachelor of Arts degree in physics from Wesleyan University. He is a Fellow of the Association for Computing Machinery (ACM) and the Institute of Electrical and Electronic Engineers (IEEE). Presentation Slides

Dr. Valerio Pascucci is the founding Director of the Center for Extreme Data Management Analysis and Visualization (CEDMAV) of the University of Utah. Valerio is also a Faculty of the Scientific Computing and Imaging Institute, a Professor of the School of Computing, University of Utah, a Laboratory Fellow, of PNNL and currently a visiting faculty at KAUST (King Abdullah University of Science and Technology). Before joining the University of Utah, Valerio was the Data Analysis Group Leader of the Center for Applied Scientific Computing at Lawrence Livermore National Laboratory, and Adjunct Professor of Computer Science at the University of California Davis. Valerio's research interests include Big Data management and analytics, progressive multi-resolution techniques in scientific visualization, discrete topology, geometric compression, computer graphics, computational geometry, geometric programming, and solid modeling. Valerio is the coauthor of more than one hundred refereed journal and conference papers and has been an Associate Editor of the IEEE Transactions on Visualization and Computer Graphics. Presentation Slides

Dr. Ann Quiroz Gates is Professor and Chair of the Computer Science Department at the University of Texas at El Paso. Her areas of research are in software engineering and cyberinfrastructure with an emphasis on workflows, ontologies, and formal software specification. Gates directs the NSF-funded Cyber-ShARE Center that focuses on developing and sharing resources through cyber-infrastructure to advance research and education in science. She was a founding member of the NSF Advisory Committee for Cyber-infrastructure. Gates served on the IEEE-Computer Society (IEEE-CS) Board of Governors 2004-2009. In addition, she chairs the IEEE-CS Educational Activity Board's Committee of Diversity and External Activities and has established a model for specialized student chapters focused on leadership, entrepreneurship, and professional development. She is a member of the Computer Science Accreditation Board (2011-2013). Gates leads the Computing Alliance for Hispanic-Serving Institutions (CAHSI) and is a founding member of the National Center for Women in Information Technology (NCWIT). She received the 2015 A. Nico Habermann Award, the 2010 Anita Borg Institute Social Impact Award, the 2009 Richard A. Tapia Achievement Award for Scientific Scholarship, Civic Science, and Diversifying Computing and was named to Hispanic Business magazine's 100 Influential Hispanics in 2006 for her work on the Affinity Research Group model. Presentation Slides 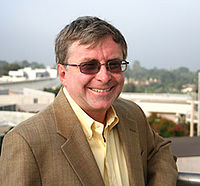 Director of the San Diego Supercomputer Center and Distinguished Professor of Physics at UCSD where he also directs the Laboratory for Computational Astrophysics. He received his B.S. from Caltech in 1975, and his Ph. D. from UC Davis in 1980. After holding appointments at the Lawrence Livermore and Los Alamos National Laboratories, the Max Planck Institute for Astrophysics, and the National Center for Supercomputing Applications, he joined the faculty at UCSD in 2000. His research focus is the computer simulation of astronomical phenomena using supercomputers, and the development of the numerical methods to carry them out. He is the author of over 200 papers on diverse topics including star formation, cosmic jets, and cosmological evolution. His computer visualizations have appeared in numerous educational TV shows and films, including PBS Nova and The Discovery Channel. He is the recipient of the Alexander von Humboldt Research Prize and the IEEE Sidney Fernbach Award. He was elected Fellow of the American Physical Society in 2001, and the American Academy of Arts and Sciences in 2005.